Camino – “There are an estimated 75 million baby boomers in the U.S. who began turning 65 at the rate of one every 10 seconds in 2011. They make up 13% of the U.S. population.  Boomers have redefined what a senior is.  They are physically active, healthier, focused on their futures with the same passion and energy they had 30 or 40 years ago. Life is good until you talk about seniors and their risk of injury or death due to fire” cautions CAL FIRE’s Amador-El Dorado-Sacramento Unit Chief Kelly Keenan.

The Fix:
THINK about what you are doing.  So often we do things by rote or auto pilot; we do it the way we have been doing it for decades or longer.  We don’t focus our attention on what we do every day and that is where trouble can occur.  Here are some pointers:
“Taking a minute or two to seriously consider what you are doing, the risks associated with that activity and maybe changing the way you do it, can be lifesaving.  Finding a fresh approach to an old habit may not only make that activity safer, but it may also breathe some new life into something you took for granted.  Seniors are a treasured population and we need to help keep them safe.  With a little time and energy we can all make sure that is a reality" says Chief Keenan.

For more information on fire and life safety, check out the following websites:
www.fire.ca.gov or http://www.usfa.fema.gov/citizens/older/.  If you would like to receive FREE information mailed to you, please call 530.644.2345.

Posted by Carol Harper, Community Media at 7:03 AM 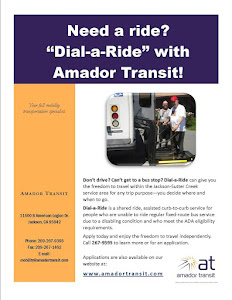